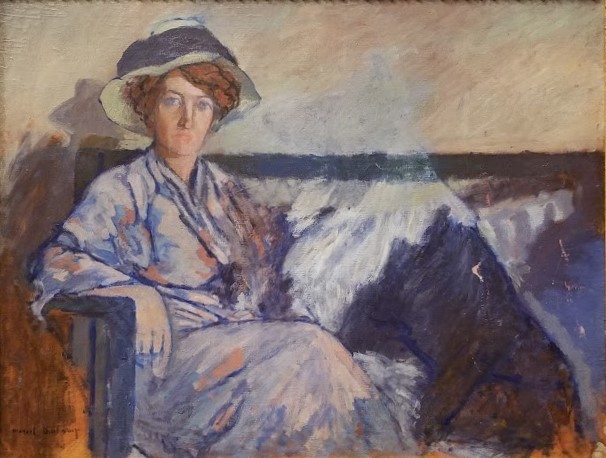 Fountain — a porcelain urinal signed R. Mutt — is undoubtedly Marcel Duchamp’s most famous work. When he submitted it to the Society of Independent Artists exhibition in 1917, it became the object of one of art history’s greatest controversies. Today, Fountain – and perhaps some of his less-famous “readymades” — are all that many of us know about Duchamp’s output as an artist.

Duchamp was 30 when he thus thumbed his nose at artistic convention. But his early development as an artist — starting in his mid teens — began on the usual traditional path. He learned to draw in the academic manner and learned to paint by imitating the style of impressionist and post-impressionist artists — especially that of his older brother, Jacques Villon.

It’s a small group of five of his early oil paintings in the collection of the John and Mabel Ringling Museum of Art that surprises those who know him only by his “readymades.”

The works reveal the influence of the Impressionists and their successors — artists like Cezanne, Gauguin and Signac.

The adjacent wall text calls our attention to “Duchamp’s fluency with impasto, the technique of building up layers of thick paint on canvas” and points out the refined way in which he handled color and line.

As a group, these works illustrate a swift progression in Duchamp’s development as a young artist.

The earliest of the paintings — decidedly Impressionist — dates to 1905.

The latest, painted in 1909 at age 22, suggests the beginnings of a cubist sensibility, presaging what was to come.

As the wall text states, these five paintings are “strangely removed from his productions that were to follow.”

By World War I, Duchamp had rejected the work of many of his fellow artists, including the likes of Henri Matisse, labelling it retinal art: intended only to please the eye. He had come to believe that art should serve the mind — and it was this sort of avant-garde thinking that put Marcel Duchamp at the forefront of the “cosmic shift” in Western art that occured in the first half of the 20th-century.

Read our post about the John and Mabel Ringling Museum of art.