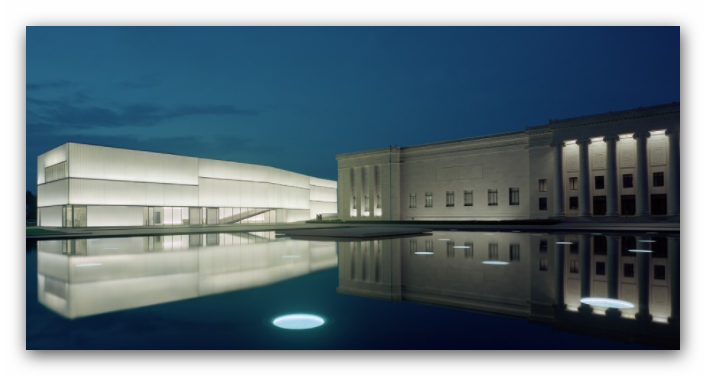 Recognized worldwide as one of America’s finest art museums, the Nelson-Atkins Museum of Art strives to be the place “where the power of art engages the spirit of community.”

In support of that “spirit of community” entry to the Nelson-Atkins Museum and its renowned collection of nearly 40,000 art objects is always free.

The Nelson-Atkins Museum of Art emerged from the shared dream of two individual Kansas Citians. William Rockhill Nelson, founder of The Kansas City Star, was convinced that art and culture were requirements for a city to be truly civilized. When Nelson died in 1915, the bulk of his estate was used to establish the William Rockhill Nelson Trust for the purchase of works of art.

Mary McAfee Atkins, a local school teacher and wealthy widow, had similar aspirations. When she died in 1911, she left $300,000 to the city, earmarked to build a museum. By the time the museum was actually built, in the 1930s, the bequest was worth the then-extraordinary sum of $700,000. Only one other museum in the United States, New York’s Metropolitan Museum, was so well endowed.

Through their generosity and foresight, the William Rockhill Nelson Gallery of Art and the Mary Atkins Museum of Fine Arts opened to the public in December, 1933. The Great Depression was full-on, and there were lots of bargains to be had — and few buyers — in the global art market, so Kansas City went shopping! This fortuitous timing created a world-class foundation for the collection of the Nelson-Atkins Museum of Art.

Of course, by the 21st century, the Museum was bursting at it classically-colonnaded Beaux-Arts seams, so, in 2007, an addition designed by Steven Holl Architects, was unveiled. The new Bloch Building added 165,000 square feet to the Museum, an increase of 71 percent. It features more than 4,000 square feet for special exhibitions, as well as a major art research library.

The all-white, translucent glass structure uses ever-changing natural light during the day and glowing illumination at night to ensure that the art is presented under the best light possible.

Time magazine named it 2007’s №1 architectural marvel, and it has since won numerous architectural awards, including the Capstone Architectural Design Award in 2008. In 2017, Architecture Curbed named the Nelson-Atkins one of 16 U.S. Museums with Outstanding Architecture.

One of the highlights of the design is a 134 x 161-foot, 120,000-gallon reflecting pool outside the west entrance, over an underground parking garage. Controversial initially, the Bloch Building has become an iconic part of the cityscape, especially at night, when the glass panels glow like moonlight.

Also iconic are the four giant Shuttlecocks that are seen on the grounds, designed for the site by Claes Oldenburg and Coosje van Bruggen. The Sculpture Park collection began in 1986 when 57 works by artist Henry Moore were acquired. 10 additional Moore sculptures were later added, and a Modern Sculpture Initiative has contributed to the rapid growth of the collection and expansion of the garden, known as Donald J. Hall Sculpture Park.

Although holdings include contemporary art, an African collection, and design & decorative arts, the Museum is best known for its holdings of Asian art, European and American paintings, photography, modern sculpture, and its new American Indian, and Egyptian galleries.

The outstanding European art collection includes painting and sculpture from the medieval period to the late 19th century, with strengths in 17th-century Italian Baroque paintings and an impressive selection of 19th-century Impressionist and Post-Impressionist paintings. Caravaggio’s Saint John the Baptist in the Wilderness is one of the museum’s greatest treasures.

If all these riches weren’t enough, at the Nelson-Atkins we can now gaze upon the Gates of Paradise!

One of only two sets cast from the original 15th-century doors at the Baptistery in Florence, the 17-foot, four-and-a-half-ton gilded doors were installed in September 2017.

Lorenzo Ghiberti’s production of this massive portal is considered the defining moment of the Italian Renaissance — and they are spectacular!

The Nelson-Atkins Museum of Art is an ArtGeek Champion, helping to provide free access for all to the ArtGeek.art exhibition search engine.

Admission is free every day. Special exhibitions may have a ticket fee.
OPEN
Wednesday, Saturday and Sunday: 10am-5pm
Thursday and Friday: 10am-9pm
CLOSED
Monday and Tuesday; and major holidays

As always, it’s a good idea to call ahead to verify!