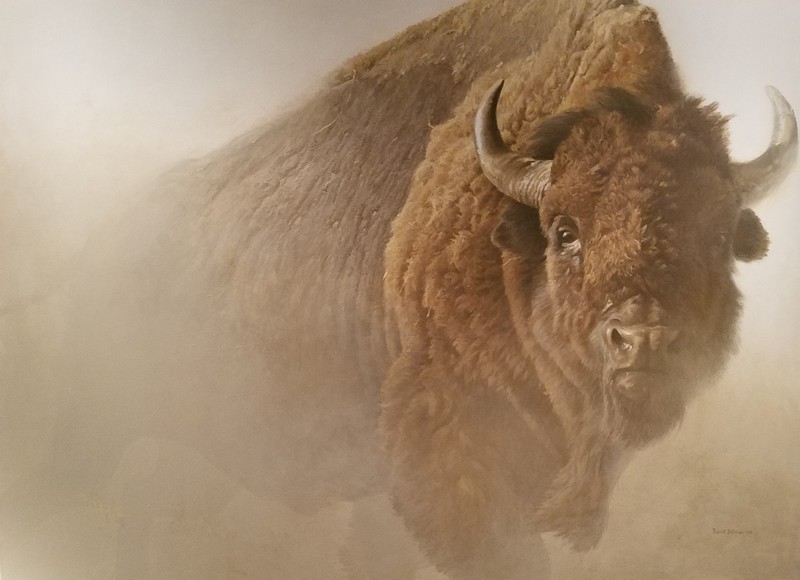 … and what better place for it than Jackson, WY — home of the National Elk Refuge, gateway to the Teton Mountains, and just a hop, lope and scamper to Yellowstone National Park?

Perched on a hillside, facing spectacular views, the National Museum of Wildlife Art appears to emerge from the earth like a natural outcropping of rock. Housed in a beautifully-crafted, purpose-built space — inspired by the ruins of Slains Castle in Aberdeenshire, Scotland — the low and rangy building is constructed of rough stone, blending seamlessly into the native terrain.

The Museum’s permanent collection of more than 5,000 catalogued items includes paintings, sculpture, and works on paper by more than 550 artists, ranging from early American Tribes through contemporary masters. These exceptional holdings have evolved from the solid foundation of Joffa and Bill Kerr’s world-class collection of wildlife art, known as the JKM Collection.

Dedicated to North American wildlife, supplemented by wildlife art from around the world, the collection chronicles the history of wildlife in art from 2500 BC to the present.

The collection of American art from the 19th- and 20th-centuries records European exploration of the American West, and features many well-known artists, including the likes of Henri Rousseau, Gericault, Rosa Bonheur, Bierstadt, Thomas Moran, Carl Rungius, Picasso, Andy Warhol and Georgia O’Keeffe.

The museum’s holdings encompass a variety of genres, including explorer and sporting art, as well as Romantic, Impressionist, Realist and Modernist works.

Despite the spacious 51,000 square-foot interior, only 10–15% of the collection is on display at any given time.

A visit to the National Museum of Wildlife Art was a highlight of our recent trip through WY. Although we were expecting an exceptional museum experience, we were surprised and delighted by the first-rate artwork, excellent curation, and enlightening contextual signage. (And our lunch at the restaurant, Palate, was a treat too: good service, good food, and an unparalleled view!)

From one gallery to the next we were surrounded by exemplary paintings and sculptures. Our engagement with the art was enhanced by generous notations about the artists, history, and artistic techniques, plus timelines providing broader context. Below are a few of the works that struck my fancy.

One example of “look more carefully” contextual information was this: “In the 1650s, painting a creature in its natural habitat was rarely an artist’s primary concern.” […] In In The Garden of Eden (below), “a hazy figure appears in the center of the composition (circled in red) where the artist painted an elephant, but then edited it out. With time, the over-paint has become transparent…”

The text also points out that the composition conflates the traditional Garden of Eden scene with with another popular 17th-century genre, the hunting scene. That some of the animals appear in pairs suggests that a reference to Noah’s Ark was thrown in for good measure.

Introduced to Northern New Mexico by Ernest Blumenshein, William Herbert Dunton settled in Taos in 1912, enchanted by the light and landscape. Although he was a founding member of the Taos Society of Artists, he maintained a style of his own, developing a modernist aesthetic characterized by abstracted forms, bold patterns and simplification of details, as we see in his Blacktail Deer in Aspens (above).

The Museum holds the largest public collection of Carl Rungius’ work — Rungius being arguably the most important big game painter of the early-20th century, and the first career wildlife artist in North America. A full gallery is dedicated to his paintings, filled with light, wildlife, and Western landscapes.

Read our post dedicated to Carl Rungius — about the artist and his work at the National Museum of Wildlife Art.

Jessie Arms Botke maintained a private aviary on her ranch outside Los Angeles. Her Black Peacocks with Japanese Persimmons (above) shows how she combined her love of avian forms with her early training, painting decorative interior murals and designing tapestries.

Alexander Phimister Proctor is best known for his sculpture, and this small watercolor may have been a preparatory study for a three-dimensional work. Examples of Proctor’s sculptural legacy are scattered across the US. He saw himself as witness of the death of the old America, at a time when many of his contemporaries were seeing the birth of a new nation. His depictions of the animals and people of frontier America provide us today with valuable historical insight.

At first glance, William Merritt Chase’s Still Life, Cod and Mackerel didn’t appeal to me. But the piece became much more interesting when I read the adjacent placard: “In 1878, Chase began still life painting in Venice. Borrowing fresh fish from merchants, he worked quickly so he could return the fish before they spoiled. Art critic Duncan Phillips proclaimed Chase ‘unequalled … in representation of the shiny, slippery, fishiness of fish.’”

Then there was this irresistible image, Rocky Mountain Hares, by William Jacob Hays … and so much more!

Undoubtedly, this exceptional museum would be more widely-known and would see many more visitors if it were in our nation’s capital. Go West! If ever there was a destination museum, the National Museum of Wildlife Art is it. Great for kids and adults alike. Art-lovers. Animal-lovers. History buffs. Whatever your inclination, you’ll enjoy spending time in this museum.