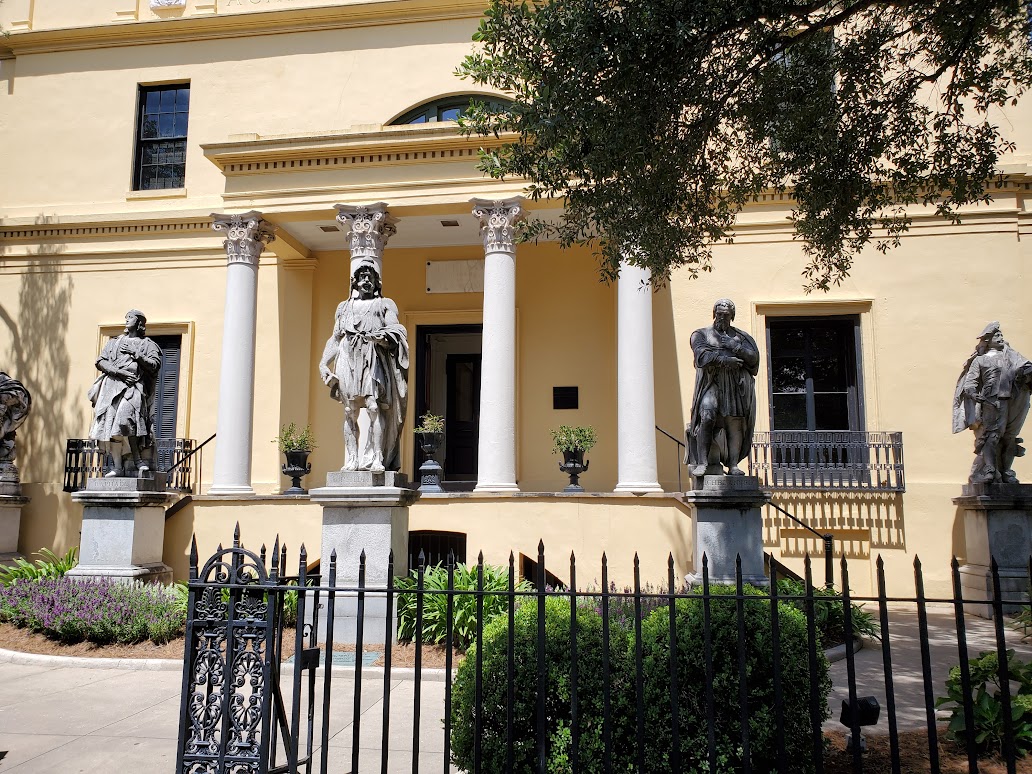 You might expect the South’s oldest art museum to be in the capital city of one of the southern states, not in a city of 330,000 (2022). But in 1885, Savannah –with about 35,000 residents — was nearly twice the size of the second-largest city in the state, Augusta. In fact, when Savannah was established in 1733 it was the state capital of Georgia.

The Yamacraws, a Native American tribe, were the first known people to settle in and around Savannah. In the 18th century they met the newly arriving European settlers, and a friendship developed between the indigenous and colonial leaders. This allowed Savannah to flourish, unhindered by the warfare that marked the beginnings of many early American colonies.

Designed in 1819 for Alexander Telfair (1789-1832) — a merchant, planter and civic leader — the Telfair Mansion boasted state-of-the-art residential technologies, including an elaborate plumbing system, with running water, toilets, cisterns and baths. Following the deaths of his older brothers, Alexander Telfair became the head of the family at age 29, taking on responsibility for the family’s plantations and mercantile operations. He owned a choice lot, located on Savannah’s St. James Square (now Telfair Square), and it was here that he built a mansion suitable for himself, and his three unmarried sisters and mother.

Alexander’s sister, Mary (1791-1875), was the last surviving member of the family. The eldest of three daughters, Mary received the finest education available to young women of the time. Well-read, cultured and intellectual, Mary travelled extensively along the Eastern seaboard and throughout Europe.

The Telfair Academy was created under the terms of Mary’s will, and the museum opened to the public ten years after her death. I suspect she acquired some of the European paintings and sculpture that grace the museum.

The visitor experience today remains much as it was then. The downstairs front galleries feature original objects that the Telfair family lived with. Paintings, sculpture, furniture, architectural features and ephemera provide visual reference to the transformation of this early 19th-century home into a landmark museum.

The two so-called “Rotunda” galleries primarily display paintings and plaster casts acquired by the museum during the late 19th- and early 20th-centuries.

After a quick peek at the two period rooms, we headed back to the Rotunda galleries. These grand spaces allow the display of some out-sized paintings, including Julian Story’s Black Prince of Crécy, the arresting La Parabola/The Parable by Cesare Laurenti, and a full-scale plaster cast of the Vatican Museum’s Laocoön Group.

Other favorites in the rotundas include The Boar Hunt, Still life with Apples and Nuts, Ship of the Desert, and Valley Bridge.

Felix Valloton’s profile portrait of Gari Melchers was a surprise, since I hadn’t known that their paths had ever crossed. Telfair Museums’ fine arts advisor from 1906–1916, Melchers acquired some of Telfair’s most important and enduring works. He was a respected American Impressionist in his own right. Belmont, Gary Melchers Home and Studio is located in Falmouth VA.

Another surprise was learning that the Telfair Museums owns nearly 100 paintings and drawings by Kahlil Gibran (American, born Lebanon, 1883-1931). It is the largest collection of Gibran’s visual art in United States.

Two permanent exhibitions are on display in the upstairs rooms of the home.

Beyond the Sea: Impressionism and Modern Painting in Europe (ongoing)

This charming Impressionist and Post-Impressionist exhibition highlights 18 of the museum’s finest turn-of-the-century paintings. For Gari Melchers, Robert Henri, Frederick Carl Frieseke, and an cohort of their contemporaries, Europe presented new subjects and modes of painting along the sunny coasts of France, Italy, and Spain and in art capitals like Amsterdam and Paris. The installation includes a mix of landscapes and figure paintings, Old World scenery and people. Often working outdoors, these artists used expressive brushstrokes, experimenting with weather conditions and the play of natural light.

Before Midnight: Bonaventure and the Bird Girl (ongoing)

Fans of Midnight in the Garden of Good and Evil are often disappointed to learn that the beautiful little sculpture they love no longer stands where they expect it to be. Bird Girl (1936) was made famous by Jack Leigh‘s photograph for the cover of John Berendt’s bestselling 1994 novel of Savannah. (It was on the NYT Bestseller list for 216 weeks!)

Some years ago Sylvia Shaw Judson’s iconic sculpture was removed from Bonaventure Cemetery, where it had stood for decades. It was brought to the Telfair Academy to protect it and the sanctity of the age-old burial ground from a constant stream of Berendt pilgrims.

Happily, Bird Girl is nicely presented here within the context of the history and art of Bonaventure Cemetery.

Bird Girl was purchased in 1938 by Lucy Boyd Trosdal for the family pot in Bonaventure Cemetery. After Berendt’s book brought thousands of trampling visitors to Bonaventure, the Trosdal family removed the sculpture and later loaned it to the Telfair Museums for safekeeping.

Judson originally designed Bird Girl as a garden statue, creating six original castings. Five cast in bronze and one in lead, they are dispersed across the United States.

The Telfair Museums is made up of three sites — the Jepson Center, Telfair Academy and the Owens-Thomas House — only the first two of which did we have time to visit. I would guess that the Owens-Thomas House and its adjacent gardens, carriage house, and slave quarters are as well maintained and curated as the two we did get to see.

We only had 1 full day in Savannah …I recommend more time in this beautiful, historic city! However, vicariously, you can experience the wealth of art offered by the Telfair Museums, not only in the Telfair Academy, but also the Jepson Center, by also reading Part 1 and Part 2 of this three-part series.