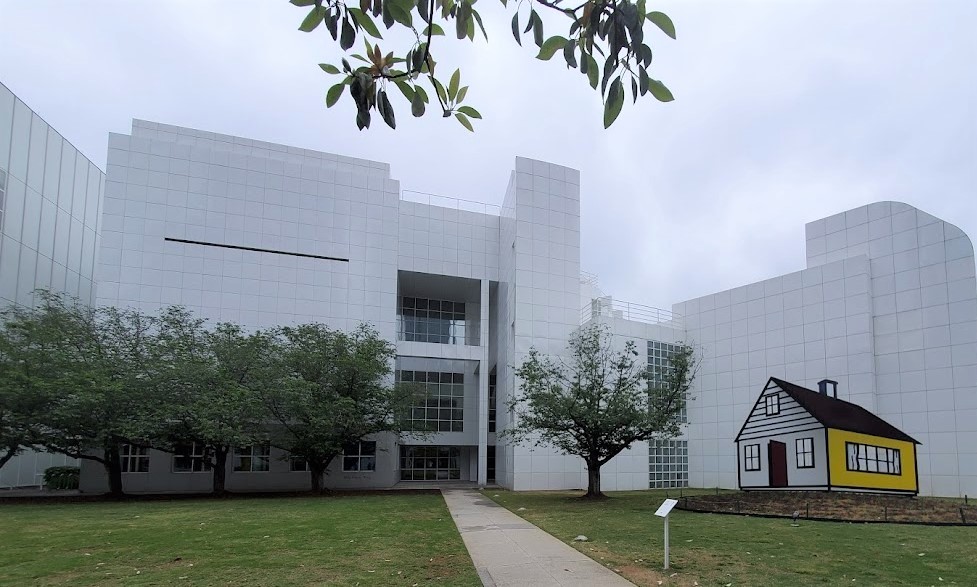 Today’s High Museum of Art would be unrecognizable to the foresightful patrons who founded the Atlanta Art Association in 1905, when the population of the city numbered roughly 100,000. The High now serves 6MM Atlanta metro-area residents — plus an untold number of domestic and international visitors — and the collections and physical plant have kept pace.

In 1926, the donation of the High family’s residence on Peachtree Street established the Museum’s first permanent home, and after three decades of growth, the Museum moved to a new brick structure adjacent to the old High house. However, the next stage in the Museum’s development was borne out of tragedy.

Shockingly, in 1962, heading home from Paris from a Museum-sponsored tour of European art capitals, 122 Georgia art patrons perished when their plane crashed during an aborted take-off at Orly Field.

The Atlanta Arts Alliance was founded in their memory, and the Atlanta Memorial Arts Center opened in 1968—a multi-disciplinary arts campus constructed surrounding the existing Museum.

Growth didn’t stop there. In 1983 an addition designed by Richard Meier opened to worldwide acclaim. It has received many design awards, including a 1991 citation from the American Institute of Architects as one of the “ten best works of American architecture of the 1980s.” The 135,000 square-foot facility, known as the Stent Family Wing, tripled the Museum’s space, allowing the High to mount more comprehensive displays of its collections.

In 2005, one hundred years after its founding as the Atlanta Art Association, the High Museum of Art expanded yet again, in response to increased demand for exhibitions and programming, strengthening the High’s position among art museums in the Southeast. A vibrant “village for the arts” at The Woodruff Arts Center in Midtown Atlanta was created, with three new buildings designed by Italian architect Renzo Piano. More than doubling the Museum’s size, the expansion has allowed the High to display more of its growing collection and to increase educational and exhibition programs that address the needs of larger and more diverse audiences.

So much to see!  We arrived at 10 and left at 2 feeling highly satisfied. But, in retrospect, I suspect we barely made a dent.  I know we accidentally missed the Shaheen Collection of French Works, and I’m kicking myself for that.

The Collection – Folk and Self-Taught Artists

The human drive to create and the expression of the artist’s personal values that is conveyed in the work of self-taught artists always charms me.  Since 1994, the High has been the only general-interest museum in the United States to have a dedicated collection of folk and self-taught art, today holding more than 1000 objects.

The Folk and Self-Taught Artists galleries highlight the similarities of material, practice, and subject matter that have reached across time and space. Historical works appear alongside their 20th and 21st century heirs, demonstrating how certain traditions have persisted over many years at the hands of these artists, despite – or perhaps because of – their lack of formal training. Exploring many of the same artistic strategies, we repeatedly see the assimilation of found objects, references to spirituality and cultural identity.

The Skyway Sculpture Court is a light-filled, airy space in the Folk and Self-Taught Art Galleries that includes work in metals, both found and forged, welded and cast to evoke human and animal forms.

While some are fanciful, Henry Church’s 1888 “A Friend in Need Is a Friend Indeed” is both masterful and deeply meaningful, referencing spiritual and social concepts. Church and his family provided safe haven for slaves escaping to freedom before emancipation, and he was an adherent of Spiritualism, a religious movement popular with abolitionists and reformers in the 19th century.

In this work, a shepherd safeguards a cast iron lamb from an aggressive mountain lion, which in turn is being attacked by the shepherd’s dog. Carved from a single block of sandstone from a quarry near his home, and the iron components were cast separately by him at a local blacksmith shop.

For more than two decades, Howard Finster’s work has been a fixture at the High, which has the largest public collection of his work outside of Paradise Garden. Finster (American, 1916–2001) was one of the most prolific artists in history: he created 46,991 signed and numbered works between 1976 and his death.

A preacher, bicycle repairman, inventor, and devoted family man, Howard Finster (American, 1916–2001) had a vision from God in 1976 commanding him to begin preaching in paint. In 1994, the Museum worked with Finster to acquired key pieces from his Paradise Garden, cataloguing and conserving these singular holdings.

Installed in the Anne Cox Chambers Wing, this ongoing exhibition is drawn from the High Museum’s collection and features artworks made by women. In observance of the centennial of the Nineteenth Amendment to the U.S. Constitution granting women the right to vote. Many of the works of selected artists — including the likes of Agnes Martin and Kiki Smith, as well as midcareer artists such as Won Ju Lim and Chantal Joffe, and emerging artists like Jamian Juliano-Villani – are inspired by or related to feminist concerns which were advanced by the women’s movement of the 1960s and 1970s.

The Collection – Modern and Contemporary

To get from here to there, one passes through the bright and varied galleries displaying a selection of the Museum’s modern and contemporary holdings. Engaging through color and light, shape and scale, works run from a Frank Stella shaped-canvas and a monumental Anselm Kiefer, to Anish Kapoor’s science-as-art, to enigmatic forms by Martin Puryear.

One stunning piece, Nishijin Sky from Teresita Fernandez’ Gold Series (2013-2014), is beautifully hung, alone, in a small gallery, viewable from both sides. This four-panel screen, mounted in a folding brass frame, is translucent when seen from one side, and shimmers with gold when viewed from the other side.

Special Exhibition: What Is Left Unspoken, Love  (through August 14, 2022)

Is there another subject as profound as love? Universal from time immemorial yet with a persistently elusive definition. The installation features nearly 70 works, including paintings, sculpture, photography, video and media art, by more than 35 international artists. How can love be expressed in art?  Let me count the ways …

Carrie Mae Weem’s poetic narrative, The Kitchen Table Series, is a self-performance set of 20 platinum prints and 14 letter-press texts that lines two walls. From the first image — a man and woman playing cards together — to the last — a woman playing solitaire — the narrative describes a woman’s relationship with her lover, her career, her politics, and motherhood.

A surprise was the two figures of Keith Edmier and Farrah Fawcett, each sculpted by the other, from a body of work titled, Recasting Pygmalion. Edmeir described their working friendship as “a kind of marriage,” suggesting that despite differences in age and background, they connected in the language of art.

Kerry James Marshall’s Souvenir I memorializes and immortalizes the fallen heroes of Martin Luther King’s Freedom Movement. The central figure, classic Marshall, embodies the divine, with “sleeves” of golden wings. She looks directly at the viewer, challenging us to acknowledge the significance of this time in history.

Rounding a corner, a sight to behold! Rina Banerjee’s Take me, take me, take me … to the Palace of Love is a small-scale re-creation of India’s famous monument to love, the Taj Mahal. Dressed in red, to signify passion, the construct confronts the Victorian tradition of white, symbolizing innocent, pure, self-sacrificing love.

Special Exhibition: André Kertész: Postcards from Paris  (through May 29, 2022)

Seeing us craning our necks and squinting, a helpful museum guard suggested we pull out our phones and look at André Kertész’s photographs through the camera function. She got a heartfelt “thank you” as we left the gallery.

So much detail, so much clarity, such small dimensions.

In 1925 Kertész (American, born Hungary, 1894–1985) arrived in Paris with a camera and meager savings. Over the next three years, the young artist carved out a photographic practice that made him impossible to label: amateur or professional, photojournalist or avant-garde artist, diarist or documentarian? His genius was that he was all these things, with an eye that saw in ways that others didn’t.

In his early years in Paris, Kertész transferred his contact prints onto inexpensive yet substantial postcard stock, forgoing the usual enlarger. As noted in the gallery text, “Often radical in proportion, his cropping, placement and trimming reinforce the carte postale as an object, as much as an image.”

“Do something with the spirit of the studio corner,” Kertész told Hungarian dancer Magda Forstner before he took her picture. She did, and the result was one of his most widely-recognized iconic images. Of it he said, “She just made a movement. I took only two photographs. … People in motion are wonderful to photograph. It means catching the right moment — the moment when something changes into something else.”

Kertész was sought after as a portraitist, but his interiors (including numerous artists’ studios), composed still lifes, and urban landscapes portray a stunning artistic purity.

We found André Kertész’s work to be completely engaging. We highly recommend this special temporary exhibition, if you can get to the High before it closes.

Having absorbed as much as we could in a single visit, on our way out we stopped by Roy Lichtenstein’s house. Roy’s house is a very, very, very fine house …

We’ve been wanting to get to the High Museum for years, believing it to be one of those major city museums that avid art geeks like us should see. Expectations met!

Hmmm … isn’t it time to plan a little trip?

The High Museum of Art is open Tuesday through Sunday; the Museum is closed on Mondays.
Tuesday – Saturday open 10 a.m. to 5 p.m. / Sunday open 12 noon to 5pm
The last ticket each day is issued one hour prior to closing.

2 thoughts on “High Dynamic in Atlanta”