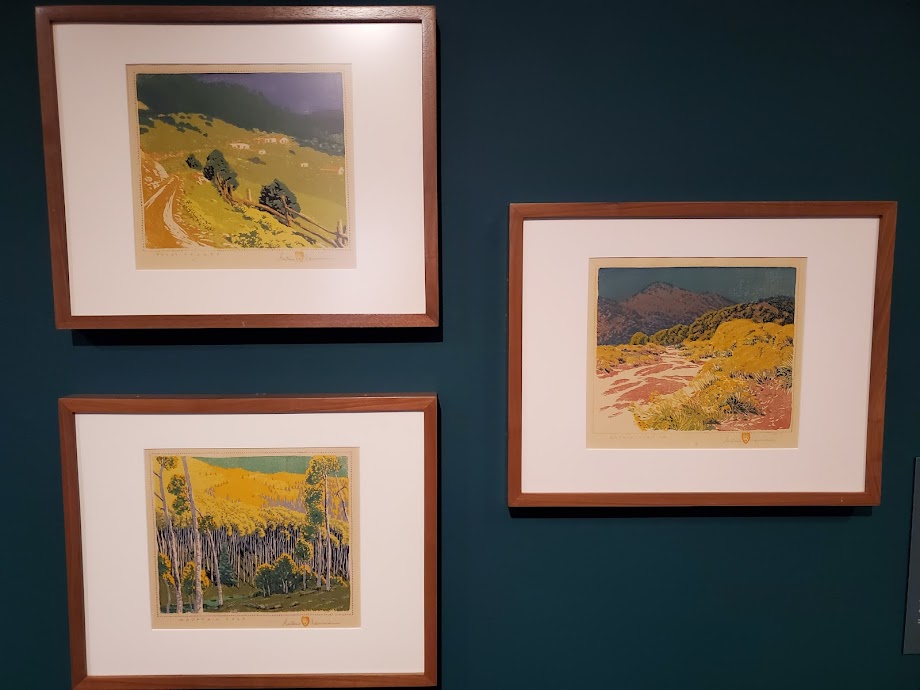 Exhibition at the New Mexico Museum of Art, Santa Fe NM, through February 13, 2022

As so many artists did in the early 20th century, Gustave Baumann (1881–1971) headed to Taos in 1918, drawn by the praises of those who preceded him. Finding the Taos art scene to be too social he decided to return to Chicago. But he stopped for a visit in Santa Fe and was enchanted by the newly-established Art Galleries of the Museum of New Mexico – now the New Mexico Museum of Art (MOA). The museum had recently put some of his prints on exhibit and — to encourage him to stay in Santa Fe — the Museum director, Dr. Edgar Lee Hewitt, invited him to set up a studio in the basement.

With that, Gustave Baumann became part of the Santa Fe art community, joining the likes of Marsden Hartley, Sheldon Parsons, Will Shuster and Gene Kloss. He never made it back to Chicago, settling in Santa Fe where he married, raised a child, and remained until his death in 1971.

Today a Santa Fe favorite son — his work is avidly collected and widely exhibited –exposure to New Mexico and its capital city reinvented Baumann’s life and art. He was already known for his color-block prints, but the work he did in Santa Fe reflected his new surroundings: his palette shifted from monochromatic neutrals to brilliant and vibrant color, and he was deeply impacted by the diverse cultural environment.

Although he was born in Germany, Gustave Baumann’s family moved to the United States in 1891 when he was 10.  By age 17 he was working for an engraving house while attending night classes at the Art Institute of Chicago. In 1904 he returned to Germany to attend art school in Munich. There he studied wood carving and learned the techniques of wood block prints. After returning to the United States, he began producing woodcuts as early as 1908, earning his living as a graphic artist.

The Baumann exhibition currently at the New Mexico Museum of Art (Go West Said a Small Voice: Gustave Baumann and Dreams of New Mexico, until February 13, 2022, explores Baumann’s iconic landscapes and his interaction with the art of the mission churches and the cultures of the Native Pueblos.

From the carved and painted santos and the churches and chapels of the Hispanic Southwest, to the Native dances and the Cochiti figures he collected, Baumann’s work was inspired by the cultural range of the region. Newly colorful and vibrant, his marionettes began to incorporate the local santos traditions and his paintings and prints referenced dynamic Native cultures.

More than three centuries before Baumann’s arrival in New Mexico, the Catholic missionaries who came to convert the Native population required devotional images to fill their newly constructed mission churches. They, and local artisans, began making santos. Now a regional tradition, these retablos (painted wood panels) and bultos (carved three-dimensional works) decorated the churches that Baumann and his contemporaries visited — as they still do today.

One gallery in the exhibition features New Mexico Santos, a themed suite of Baumann’s woodblocks. These seven images of saints, and one of the Holy Trinity, are reminiscent of, and likely based on, actual santos that he had seen.

Contributing to the richness of the exhibition, in addition to the traditional works that inspired Baumann, the work of contemporary Native and Hispanic artists are included in the show to honor the regional cultures that continue to thrive, a century after Baumann’s move to New Mexico.

By 1918, the Pueblos had begun to allow outside visitors to witness ceremonial dances. Virtually everyone in the Taos and Santa Fe art communities attended and were inspired by these events. Every Christmas Day, Baumann and his wife and friends would attend the Deer Dance at Taos Pueblo, a hybrid ritual of Pueblo and Christian practices.

Baumann was part of a movement of artists who journeyed to the West and experienced it in both similar and very different ways. The exhibition makes these thematic and stylistic comparisons by showing works by Baumann’s contemporaries adjacent to his.

“In the 20th century, the works of Gustave Baumann became iconic representations of the American Southwest,” says Dr. Mark White, Executive Director of MOA. “However, there is often less recognition that Baumann drew upon a wide range of influences, from the German avant-garde to the rich cultural heritage of the Indigenous populations of North America.” This exhibition reveals Baumann in the context of those influences and offers insights into the development of his identity as an artist.

GO WEST SAID A SMALL VOICE/ Gustave Baumann and Dreams of New Mexico
is on through February 13, 2022 at the New Mexico Museum of Art, Santa Fe, NM

Art Things Considered is an art and travel blog for art geeks, brought to you by ArtGeek.art  — the only search engine that makes it easy to discover more than 1500 art museums, historic houses & artist studios, and sculpture & botanical gardens across the US.