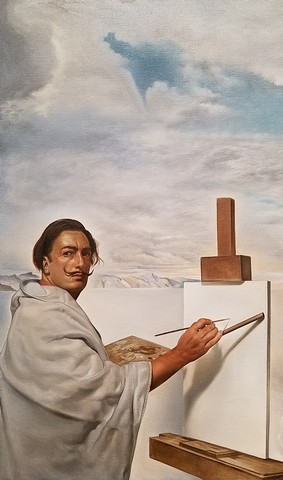 “Every morning upon awakening, I experience a supreme pleasure: that of being Salvador Dalí, and I ask myself, wonderstruck, what prodigious thing will he do today, this Salvador Dalí.“


Combining the rational with the fantastical — in architecture, art and human terms — the Salvador Dalí Museum celebrates the life and work of Salvador Domingo Felipe Jacinto Dalí i Domènech, 1st Marquis of Dalí de Púbol — known as Salvador Dalí (1904-1989). Featuring works from his entire career, the collection — the bulk of which was gifted by Reynolds and Eleanor Morse — includes more than 2,000 pieces in every medium of his artistic activity. The holdings include almost 100 oil paintings, original drawings, book illustrations, prints, sculpture, photos, manuscripts and an extensive archive of documents.

The story of Reynolds and Eleanor Morse reveals two fascinating people, whose joint life-trajectory started and ended with Dalí.  According to the Dalí Foundation’s obituary for Eleanor Morse, she and Reynolds met at a Dalí exhibition at the Cleveland Art Museum … and were married just a couple of weeks later! The following year they met the artist in person and acquired their first Dalí artwork. Thus began the world’s largest private
collection of Dalí works as well as a lifelong friendship with Dalí and his wife, Gala.

That collection came to St. Petersburg FL in 1982, and for almost 30 years the Salvador Dalí Museum was housed in a former warehouse on the waterfront. As the Museum made significant additions to the original collection over the years, a larger and more storm-secure museum space was required.

Designed by architect Yann Weymouth of HOK, the building –from the vantage of the parking area – is a rather monolithic concrete box, with its 18-inch thick hurricane-proof walls.

However, seen from the waterfront side, a glistening geodesic glass bubble — known as The Enigma — oozes across the roof and down the facade, relieving the massive angularity of the structure.

Inside, another unique architectural feature – a helical staircase – references Dalí’s obsession with spirals and the double-helical shape of the DNA molecule. The stairs lead visitors to the exhibitions on the second floor, finishing with a swirl in the glass-bubble ceiling.

“Chaos” was my first impression on entering. Contrary to the norm of vast museum lobbies, the ground floor here is filled to bursting with the museum store displays, teeming with people shopping and seeking tickets and information. Did they build too-small a space?  Or is the beehive sensation intentional?

But that sense of over-crowding was quickly forgotten as my attention was drawn into the light-infused space overhead.  The curl of the staircase pulls the eye to the ever-changing skyscape seen through the geodesic glass wall and ceiling.

This is an extraordinary architectural space — “rational and fantastical” –that sets the stage for the art experience that is to come.

We were fortunate that our visit coincided with a major temporary exhibition, Magritte & Dali (on through May 19, 2019), which explores both the similarities in the ideas of the two Surrealists, and the differences in their technique and subject matter. Read our article about the exhibition.

Also temporary” — although long-term – is Dreams of Dali, a virtual reality experience (on through December 31, 2022).  After a typically short wait to be seated in one of three chairs, a participant is fitted with a v-r headset and invited to explore Dali’s 1935 painting Archaeological Reminiscence of Millet’s “Angelus.”  This tech-aided interactive engagement ventures into the painting in ways that Dalí never dreamt of, but would undoubtedly delight him if he could don a v-r headset today!

Seeing examples of an artist’s career-long output can present surprises.  As we all do, artists grow and change over the years, but they are often primarily known for their work of a particular period – and thus tagged by a single slice of their artistic achievement.

The Dalí Museum holds more than 2,000 works from every moment and in every medium of Dalí’s artistic activity. The spacious exhibition galleries allow the permanent display of most of the collection, curated chronologically, proceeding from Early Works through Surrealism, to the “Nuclear Mysticism” of his later years.

Dalí began painting impressionist works as a self-taught teenager; subsequently he was trained in traditional painting technique at the Royal Academy of Fine Arts in Madrid. I was particularly struck by the luminous quality of The Basket of Bread, one of his early classically-realistic paintings.

Although Modern Art was discredited by his teachers, Dalí was attracted to it – especially the Cubist and Modernist work of fellow-Spaniard Pablo Picasso, who was 23 years his senior.

Adjacent wall text tells us that Dalí wanted to master multiple styles of painting, so he would often work on a traditional canvas and a modern canvas simultaneously. In the portrait he painted of his sister, shown here, he gave us both in a single painting.

His defiance of Academic custom went so far as to get him expelled shortly before graduation, when he refused to be examined by the baccalaureate committee, asserting that he knew far more about Raphael than his teachers did! Thus began his reputation as a rebel among artists.

Dalí was among those writers and artists who advanced Surrealism to become a broad cultural movement, blossoming from its origin in Sigmund Freud’s The Interpretation of Dreams to encompass art, design, film and fashion. He emerged as a central figure, with provocative ideas, stunning images, and a gift for self-promotion.

His Persistence of Memory (in the collection of the ‎Museum of Modern Art, New York), painted in 1931, became a symbol of Surrealism and the visual label by which Dalí would henceforth be best known.

Dalí’s Surrealist work presents a world that is completely defined, but that makes no rational sense: recognizable, realistically-painted figures and objects appear outside of their normal context and are reassembled in paradoxical ways.

Look, for example, at the faces of the two right-hand figures in Enchanted Beach with Three Fluid Graces.  One draws us into a tiny deep landscape, while the other is composed of minuscule ghostly figures, including a prancing horse. The painting is at once bold and delicate, the scale large and minute, the palette aggressive and quiet.

When asked if drugs were the cause of the bizarre nature of his images, he responded, “I don’t do drugs. I am drugs.”

By the end of the decade of the 30’s, though, Dalí and the Surrealists had parted ways. His lack of a political orientation and his flamboyant public personna conflicted with the group’s communist sympathies and collectivism.

In 1940 Dalí and Gala escaped war-torn Europe, living in the US until 1948. Coinciding with this change, he redefined himself as an artist, rejecting modern art’s emphasis on abstraction and its spiritual sterility. He thought of himself as a “classical” artist, addressing contemporary concepts while referencing the Renaissance.

A renewed interest in the Catholicism of his youth merged with his fascination with contemporary advancements in theoretical physics and molecular biology. He coined the term “Nuclear Mysticism” to describe his work in this period. His imagery moved away from the personal imaginings of Surrealism to a more universal representation of science and religion. Radical as always, his late works are concerned with historical subjects and realism, in an era of subjective abstract expression.

I have long thought of Dalí as a bit of a crackpot. Talented, yes — but a crackpot nonetheless. Happily, a visit to the Dali Museum rewarded me with context, exposure, and a revised attitude! He called himself a genius. He might have been right.

Open daily 10am-5:30pm (until 8pm on Thursdays).
Closed Thanksgiving day and Christmas day.
As always, it’s a good idea to call to verify ahead of your visit.