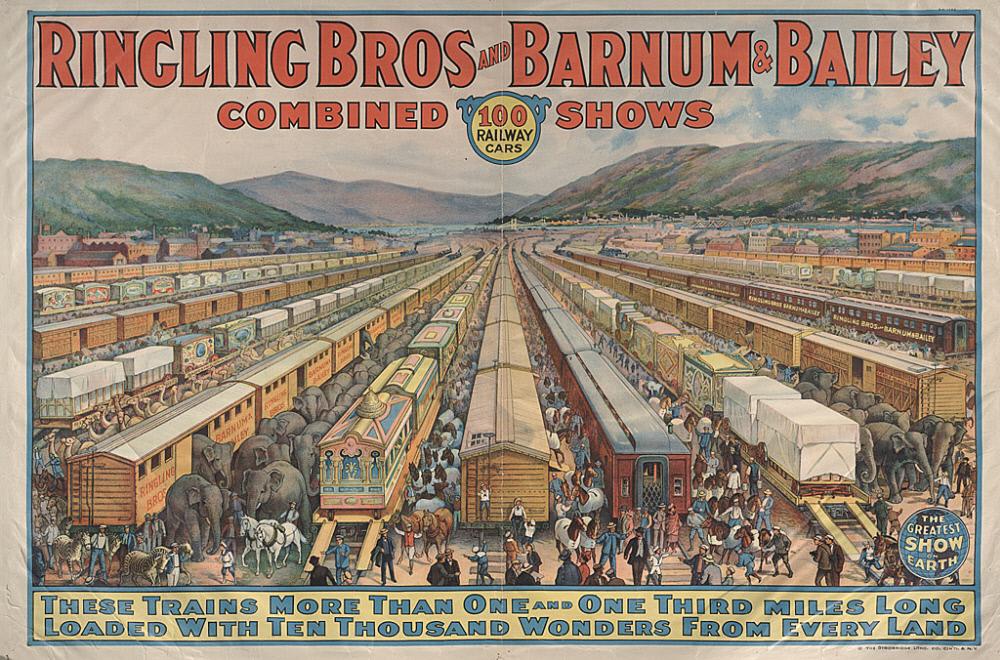 Ladies and gentlemen, boys and girls, children of all ages … step right up to see the greatest show on earth!

From 1840 to 1940, the circus was the most popular form of entertainment in the country.  Americans were beginning to have extra money to spend and a half-day off on Saturdays, and everyone got excited when the circus came to town.

John Nicholas Ringling (1866 – 1936) is the best known of the five Ringling brothers who together built a circus empire.  John started with the circus as a clown, but as the business grew he began acting as advance man, scheduling, contracting and booking acts.  In 1890 the New York Times described John as “a human encyclopedia on road and local conditions.”

In 1907, the brothers bought the Barnum & Bailey circus, merged it with their own Ringling Bros. World’s Greatest Shows to create a virtual monopoly of traveling circuses.

It was a time of rapid economic growth, and the lucrative circus business gave Ringling the wherewithal to invest in railroads, oil, real estate and other enterprises, including Madison Square Garden where he was a member of the Board of Directors.  In 1925, his personal wealth, holdings and companies were estimated at nearly $200 million.  After some 40 years in the entertainment business, along with his other investments, John had become one of the richest men in the world.

He was a major player in the 1920s Florida land boom, buying and developing land, and in 1927 he moved the winter headquarters of the circus to Sarasota from Bridgeport CT.  At one time, John and his brother Charles owned more than 25 percent of Sarasota’s total area!

John and his wife Mabel frequented New York’s exclusive auction houses, purchasing furnishings, tapestries and paintings that had decorated homes of the City’s socially-prominent Four Hundred.  What better way to decorate their homes in New York City and Alpine NJ, as well as their Sarasota mansion — a 32-room extravaganza inspired by Venetian Gothic palaces.

Like many privileged Americans in the early 20th century, John and Mabel made annual trips to Europe. They engaged the services of a Munich art dealer and began collecting art by Old Masters and Baroque artists, including four paintings by Peter Paul Rubens.  The collection became so extensive that they built a museum on the grounds of the Sarasota estate, opening it to the public.

John and Mabel’s lifestyle epitomized the Gilded Age — until the Great Depression dealt a severe financial blow to the John Ringling empire. Although he lost virtually his entire fortune, he was able to retain the Cà d’Zan estate, including the museum and the magnificent art collection.

John Ringling died in 1936 owing the government $13 million—with only $311 in the bank.  He willed his Sarasota mansion, the museum, and his entire art collection to the “people of the state of Florida.”

It took 10 years to sort out exactly what that meant.  Creditors and legalities delayed the settling of the estate and, all the while, the $1.2 million endowment was poorly managed.  The Museum was minimally maintained and seldom open to the public.

Finally, in 1946, the State of Florida prevailed, but over time it became clear that the maintenance demands of such a large property was beyond the state’s capacity.  Private donations helped keep the Museum open, but the Ringling limped along, underachieving for 50 years.

Happily, after years of negotiation, in 2000 the state transferred governance of the Museum to Florida State University (FSU), which has a long-standing reputation for excellence in the arts.  The assimilation of the Ringling cultural campus has made it one of the largest college arts complexes in the country.

An exemplary rebirth blossomed from new administrative energy and stable financing. Buildings were restored, galleries and gardens refurbished, and a Visitor Pavilion was constructed.

In 2011 the new Searing Wing added more than 20,000 square feet of exhibition space with a permanent Skyspace by James Turrell at its center.

John Ringling was an expansive, big-thinking man, so it is fitting that his legacy – born of the circus – should now count among the world-class museums in America.

Read our post about the John and Mabel Ringling Museum of Art and its extraordinary art collection.

For an amazing day of entertaining delights, head to the Ringling!