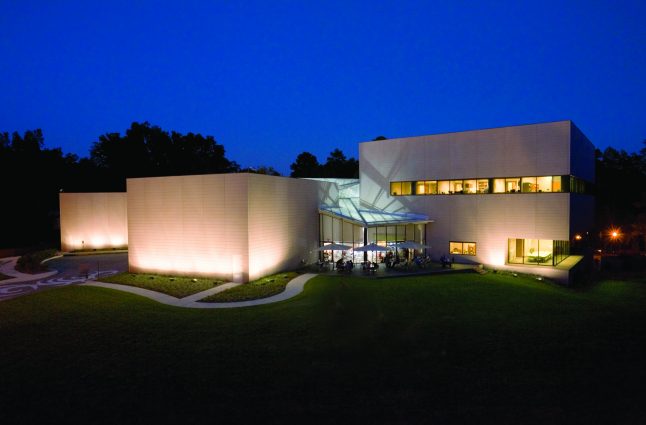 Like any top university, Duke has built a Department of Art, Art History & Visual Studies, and the Nasher Museum of Art is a classic adjunct to that program. Founded in 1969 with the acquisition of 200 medieval works which were displayed in a former science building, the Duke University Museum of Art initially served to educate and expand the cultural horizons of Duke students. Now called the Nasher Museum of Art, the wide-ranging collection has increased a hundredfold and draws art geeks like us from near and far.

Raymond D. Nasher’s vision for a new art museum can be traced to 1943, his senior year at Duke. “Art and music are basic cultural entities which must not be lost in the shuffle of ‘bread and butter’ seekers” he wrote. For decades he sought to develop the arts at Duke, and finally, 60 years later — with his gift of $7.5 million — Nasher’s dream of a new art museum was realized.

Sited on what used to be a biology research meadow, the eponymous 65,000-square-foot Nasher Museum opened in 2005. The centerpiece of architect Rafael Viñoly’s modernist design is a dramatic 13,000-square-foot glass-and-steel roof rising 45 feet above the Great Hall, with five pavilions branching off to house gallery spaces, an auditorium, two classrooms, a shop and a café.

Over the years the art holdings have grown, often through donations by alumni. For some years, the collecting focus has emphasized acquiring works by artists who have been historically under-represented or excluded by mainstream arts institutions. The result is a diverse and sometimes surprising art-viewing experience.

We began our visit in the Collection Galleries and immediately realized that we were in for a lively meander through a wide-ranging history of art. The Nasher is a comprehensive museum on a small scale, serving up bite-sized portions of time and place in a series of small galleries. Only a small portion of the museum’s permanent collection is on view at any time so, of the major historical categories of art, Asian and Islamic art, photography, and digital arts were not on view.

Art of the Americas: Mesoamerica

The installation in the Art of the Americas gallery showed pieces from the 3000-piece collection, focusing on Mesoamerican art dating from c. 500 BCE to 900 CE. Made of diverse materials from clay to jade, the works in this gallery tell of the longevity and complexity of Mesoamerican societies and illustrate how art, spirituality, and recreation payed an integral role in everyday life.

Lining one wall, a glowing display case filled with Mayan ceramics demonstrates the changes that occurred during the Classic Period (250-900 CE). Some of the vessels are covered in hieroglyphic writing and decorative patterns, while others show narrative scenes that range from creation stories and supernatural palace performances to administrative meetings and artists at work.

The Arts of Africa collection includes more than 700 works that highlight various traditional art forms from across the African continent, from regions south of the Sahara desert. The diverse examples of masks, ritual sculpture, devotional objects, bodily adornments and utilitarian items were produced in the 19th and 20th centuries.

The items selected for this installation were primarily acquired in the 1960s and 1970s. The predominance of masks and ritual sculptures reflects the preference of American and European collectors at that time for naturalistic representations of the human body.

Ancient Art of the Mediterranean and Mediaeval Art

Ancient Art of the Mediterranean and Mediaeval Art share one large gallery space, in a continuum demonstrating the influence of the 1st millennium CE on the aesthetics of the 2nd.

The first thing we saw in this gallery was a juxtaposition of three Cypriot sculptures in the Greek Archaic style with a Cypriot head from several centuries later. The stylistic comparison reflects the development of Greek culture throughout the Mediterranean region during that period.

In the image shown here, the standing figure on the right was carved in limestone in the 6th – 5th century BCE. It shows a strong Egyptian influence in the stiff, forward-facing posture and the stylized hair, clothing and facial features, with the typical slight smile. On the left — carved roughly 3 centuries later — is a Hellenistic work from the late 3rd – 2nd century BCE. Although it too is Cypriot in origin, it shows a softly rounded face, loose curls, a slight turn of the head, and realistic (although idealized) facial features.

Another vivid example of stylistic development was provided by two sets of French medieval Christian religious figures. Four stylized carved Romanesque reliefs of Apostles from the 12th century lack the realism of nearby polychrome figures of the 13th and 14th centuries.

The largest space in the Collection Galleries was dedicated to European art of the 15th through 18th centuries, with a couple of contemporary American works thrown in to demonstrate historical influence.

From early Italian Renaissance gilded devotional works to late 18th-century French sculpture this installation offered beautiful examples of a variety of objects created over four centuries. The overview text refers to the sweeping cultural transformations that occurred across Europe following the Medieval period. “During this time, the role of the artist changed as increased sources of patronage initiated a considerable shift in artistic production, and the wider movement of artists and artefacts provided for extensive artistic and cultural exchange.” This installation was curated to show broad regional differences, but at the same time “to draw connections between formal, stylistic and technical concerns of the era.”

The art and cultural attitudes in the US in the years before and during WWII reflected the Great Depression, and moved away from the avant-garde Cubism and abstraction of preceding decades. Many artists turned toward representational and narrative “social realism”, addressing issues of the time, such as unemployment and an imbalance of wealth and political power. The prosperity and optimism that followed the war, however, brought a reemergence of abstraction and stylized figuration in art. This gallery explores the cultural shifts of those decades.

I was intrigued by two paintings by Thomas Hart Benton that bracketed the period. The first work was his surreal 1922 Landscape; the later piece, Cave Spring, was painted in 1963. Although clearly by the same hand, they reflect entirely different moods.

Other favorites included Helen Lundeberg’s “Post-Surrealist” Persephone Returns, which stands as a metaphor for the destruction caused by WWII. Adjacent text tells us that Post-Surrealists made careful and orderly compositions, deliberately placing objects near each other to render a more comprehensible narrative. Also, Chaim Gross’ Tightrope Dancer and Andrew Wyeth’s V.F.W.

In what is called the Incubator Gallery, one of the two temporary exhibitions that were on at the time of our visit was a small exhibit of Helen Frankenthaler’s prints. The show focuses on an exploration of her varied methods and the numerous printmakers with whom she collaborated. The exhibition was drawn from the Museum’s collections and was co-curated by four undergraduates in the Curatorial Practicum: Exhibition Development and Design.

A highlight of the exhibit is the six proofs and final edition print of Un Poco Más (A Little More) (1987), completed in Barcelona, Spain. The adjacent text invites us “to imagine the lively and dynamic conversations between Frankenthaler and the printmakers with whom she partnered as they shared techniques and encouraged themselves to give ‘a little more’ to reach their artistic visions.”

Beyond the Surface: Collage, Mixed Media and Textile Works from the Collection, on view through February 19, 2023

The second temporary exhibition features about 40 works, exploring how artists connect seemingly disparate materials and ideas. Many of the works are meant to draw us in for close looking, and not everything can be seen or understood at first glance. Think “layers” — layers of materials and layers of ideas.

One of my favorites, of course, was Vik Muniz’s Apollo and Diana, after Lucas Cranach (Pictures of Junk), 2006. I’m a big fan of Muniz’s work. Muniz is a Brazilian artist who recreates iconic works from art history using a variety of the most unexpected materials, such as the old tires, broken chairs and other junk used in this work. Using a warehouse floor as his “canvas”, he organized a multitude of objects into a representation of Cranach the Elder’s painting, Apollo and Diana. He then photographed the curated junk from high above, causing the individual pieces of junk to meld into a cohesive image.

Other favorites were Hugo McCloud’s push pull (2019), made of plastic merchandise bags on a wood panel; Maria Berrio’s collage, Syzygy (2017), created with Japanese paper and watercolor on canvas; and Marcucio Lasansky’s Kaddish #4 (1978), which was composed with a layering of etching, engraving, soft ground, aquatint, electric stippler, scraping, and burnishing on paper.

Although the Museum collection includes many works by lesser-known artists, this exhibition includes numerous well-known 20th- and 21st-century artists as well. A Nick Cave Soundsuit (2015) greeted us in the first gallery, and works by Rashid Johnson, Romare Bearden, Purvis Young, Alma Thomas and other names familiar to me were to be seen. In addition to a bronze mythological creature in the Great Hall, Wangechi Mutu also has a wall in the exhibition dedicated to his Family Tree, made up of 13 mixed-media collages on paper, constructing a female-dominated creation mythology.

The Nasher Museum of Art gave us a broad view of art across time and place in the Collection Galleries, and a engagingly varied perspective on contemporary art in the exhibition gallery. The third pavilion was between exhibitions at the time of our visit, the galleries being prepared for the upcoming special exhibition, Roy Lichtenstein: History in the Making, 1948 – 1960 — which will be on view August 25, 2022 – January 08, 2023. We’re sorry to have missed it, but we did see evidence that it was coming!