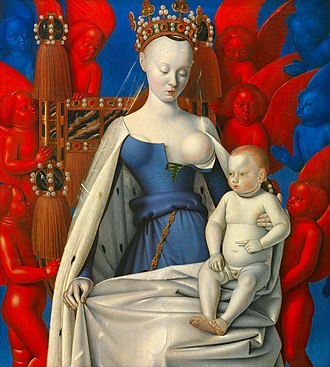 There is something disorienting about this painting. Although its location in the Royal Museum of Fine Arts in Antwerp is chronologically-correct, it is a surprise to realize that it was painted in the mid-1400s. It seems so contemporary!

Jean Fouquet (1420–1481) was perhaps the first French artist to travel to Italy to personally experience the early Italian Renaissance. Returning to Northern Europe sometime after 1437, he linked elements of the Tuscan style with the style of Hubert and Jan Van Eyck’s early Netherlandish school, and thus became the founder of an important new school of painting.

He was a master of both manuscript illumination and panel painting, and his excellence as an illuminator is evident in the precise rendering of fine detail and lucid characterization that we see in this Virgin and Child Surrounded by Angels.

The picture is actually a portrait of Agnès Sorel (1421–1450), a favorite mistress of King Charles VII of France, to whom she bore three daughters. She was apparently an extraordinarily beautiful young woman, of high intelligence, and it is said that her presence at his court brought the king out of a protracted depression. She was known as la Dame de Beauté (the Lady of Beauty).

She came to have considerable influence over the King and, among other gifts he gave her the Château de Loches — where he had been persuaded by Joan of Arc to accept the French crown. This preferential treatment, combined with her extravagant tastes, earned her powerful enemies at court.

Agnès died at the age of 28, and is thought to possibly have been murdered. Recent forensic analysis of her remains has confirmed that she died from mercury poisoning. However, in those days mercury was used to treat worms and was sometimes used in cosmetic preparations, so her poisoning may well have been an unintended consequence, rather than having been politically motivated.

After her death, the King chose her cousin, Antoinette de Maignelais, to take her place as his mistress.

One of Fouquet’s most important paintings, the Virgin and Child panel was the right half of a two-panel oil painting by the French court painter, created around 1452. The left-hand wing — now in the Gemäldegalerie in Berlin — depicts Etienne Chevalier with his patron saint, St. Stephen

Étienne Chevalier (c.1410 — 1474), who commissioned the diptych, was a top civil servant of the French kings Charles VII and Louis XI. The son of a secretary to Charles VII, he was twice sent to England before becoming secretary to the king, and became treasurer of France in 1452. Chevalier was an executor of the estate of the king’s favorite, Agnès Sorel.

Etienne Chevalier commissioned the Melun Diptych to hang over his wife’s tomb in the Collegiate Church of Notre-Dame at Melun, 25 miles southeast of Paris. Each wooden panel measures about 36.5″ x 33.5″ and the two would have been hinged together at the center. Chevalier had a close relationship with the artist, and was Fouquet’s main patron during his time as treasurer to the king.

Looking at Jean Fouquet’s Madonna and Child Surrounded by Angels one can’t fail to wonder about the host of blue and red figures crowding in on the throne. I’ve seen similar red and blue putti in other works, but never before had I seen them together, and in such profusion. Some research was in order!

It turns out that the little red figures are seraphim, the blue are cherubim. These angels have specific functions: cherubim support the Throne of God and represent the Presence of His Glory, and seraphim surround the Heavenly Throne as fiery guardians.

Cherubim and seraphim were not counted among the seven choirs of angels in the Jewish Bible, nor were they mentioned in the angelic hierarchy during the early centuries of Christianity; but they were generally believed to exist. It was Pope Gregory the Great (540- 604) who created two additional angelic orders, making nine, divided into three choirs, with cherubim and seraphim populating the highest choir.

Angels were believed to be fire, breath, spirit, and radiance. Biblical descriptions of these “beings of fire and wind” were immaterial, unsubstantial. Thus, a certain degree of imaginative license was given to artists who attempted to visualize these abstract creatures, and by the time of the Renaissance, artists were portraying cherubim and seraphim as pudgy, pink-cheeked, winged tots … which today are often referred to as “putti”.

The artistic tradition that developed — washing cherubim in blue, seraphim in red — symbolized the wind and fire of their immateriality.

By the way: The word putto — the singular form of putti — is the Italian word derived from the Latin putus, meaning “small boy” or “child.” In modern Italian, putto now only signifies a chubby, childlike, winged figure in art, as in this famous duo by Raphael.

Use ArtGeek to plan trips, to discover hidden gem museums, and to find temporary art exhibitions that have special appeal to you — wherever you are or wherever you go in the US. It’s easy to use, and it’s free!

(This article combines two blog posts written in June, 2010 on a different platform. Recently, the author saw Fouquet’s Virgin and Child Surrounded by Angels on social media, noted the many baffled questions and comments, and thought of the continued relevance of the 10-year-old posts.)

2 thoughts on “Art in Context: Seraphs Are Red, Cherubs Are Blue”