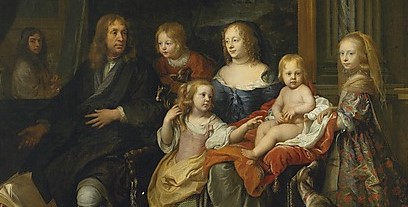 He’s such an obscure figure today that he doesn’t even warrant a Wikipedia entry — but he must have been Somebody, to have been the subject of this outsized painting by Charles LeBrun, court painter to King Louis XIV.

In 2014, at the time of its acquisition, Thomas P. Campbell, then-Director of the Metropolitan Museum of Art, said: “This magnificent canvas by the leading painter of King Louis XIV is a landmark in the history of French portraiture. It depicts the family of a major figure in the world of finance and one of the most important collectors in 17th-century Europe.”

Context is the lifeblood of art appreciation. And happily, development of context is a big part of the art historian’s métier, so we have terrific on-line resources that allow us to delve into the history that engendered the art we see on mueums walls.

I look at this picture and wonder “Who was Everhard Jabach?” He’s such an obscure figure today that he doesn’t even warrant a Wikipedia entry! But clearly he was somebody important … to have been the subject of this magnificent canvas (92″ × 128″), painted by Charles LeBrun, court painter to King Louis XIV.

In fact, he was a tremendously wealthy 17th-century German banker whose collection of paintings and drawings was sold to the French crown to form the core of the collection of the Louvre.

Wait. …I thought I’d heard that this painting was destroyed in Berlin in WWII? Ahh … it turns out there were two versions. This one entered a British country house (one wonders how that came about!) in 1832 where it quietly remained under the radar until it was put up for sale in 2013.

Notice near the top of the canvas the line of damage that runs across its full width. Apparently, the top portion if the canvas was folded over to reduce the height of the huge picture and it was reframed to fit on a particular wall in its Kentish home.

Close examination of the picture shows some pentimenti indicating that it was, in fact, the original of the two versions … which makes it the more important of the two.

And, speaking of importance, who is the personnage whose portrait is so prominently placed behind, to Jabach’s right? Wait … that’s not a painting within the painting, that’s a mirror, reflecting the painter, Charles Le Brun (French, 1619–1690), sized only slightly smaller than his subjects.

Of course, a big part of the joy for the viewer is in piecing together the narrative. This painting combines the domestic intimacy and descriptive richness that was a hallmark of Dutch and Flemish art, which — as we can see in the picture — Jabach collected and admired.

Much can be gleaned from what the eyes and gestures tell us. Here Le Brun has, in this one static moment, captured the family dynamic amidst the sumptuous setting: Jabach senior expounds upon the artifacts that illustrate his intellectual and cultural interests. His eldest son hangs adoringly on his every word, while his wife stoically — yet again — bears the pedantic monolog. I sense Everhard does go on a bit!

The always-helpful younger daughter tries to gain the attention of her baby brother whose curiosity is engaged outside with something beyond the frame. And the manipulative adolescent daughter makes provocative eye contact with the viewer, while the greyhound at her feet seems to be intensely willing her attention to return into the family portrait.

My appreciation of this painting started with what I saw when I took the time to look at the details — or thought I saw, to my own personal satisfaction. Then my appreciation grew as I looked further, away from the canvas and into the writings of the art researchers who’ve studied this piece and the artist and the subject and the history that engendered it.

That’s how Charles Le Brun’s monumental portrait of Everhard Jabach and his family moved from being just another 17 th-century portrait of a wealthy man and his possessions to a picture with meaning. I begin to understand why Thomas P. Campbell believed that the acquisition of this painting “transforms the Museum’s European paintings collection by adding a defining work both in the history of art and in cultural and political history.”

One thought on “Who was Everhard Jabach?”