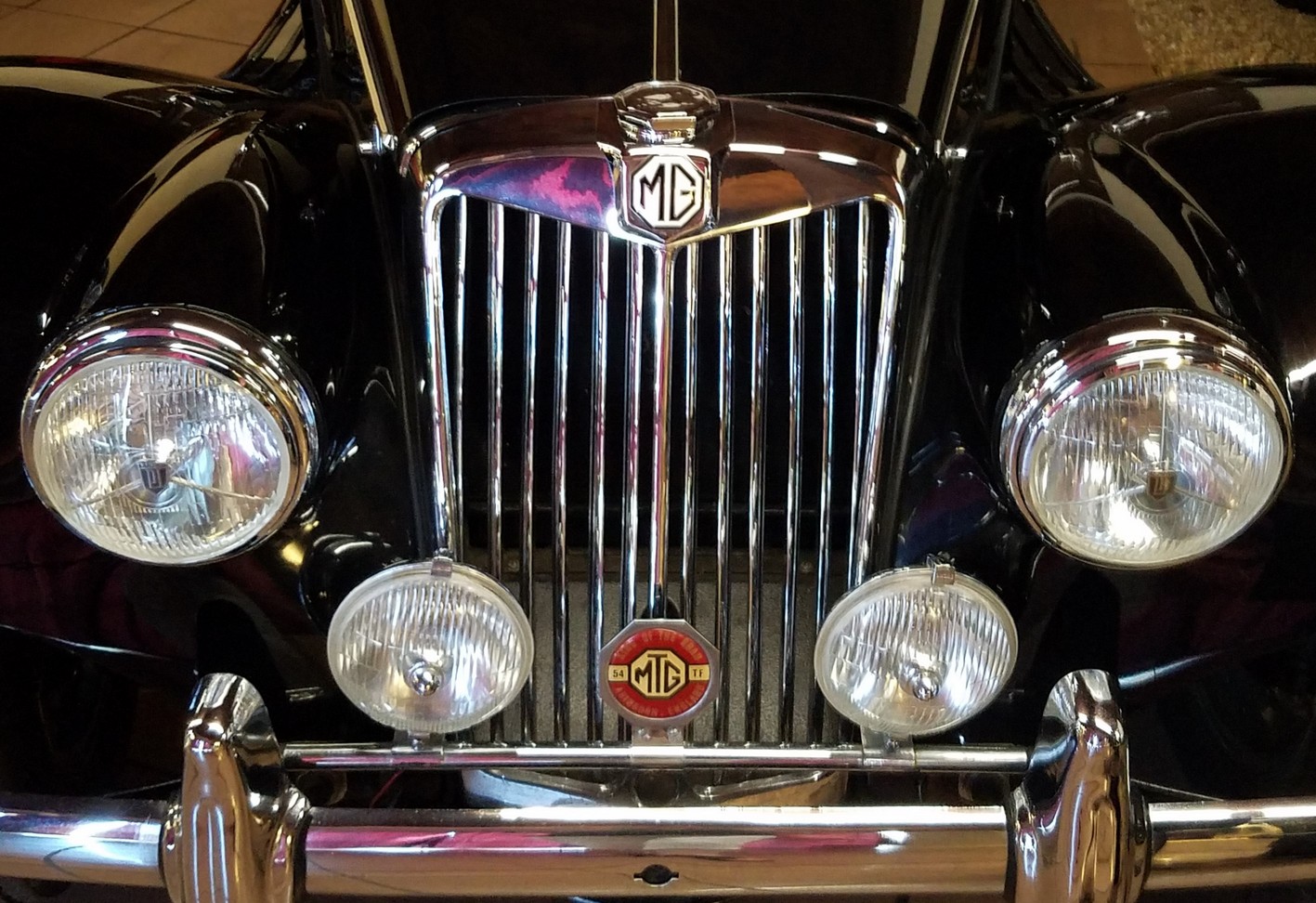 The Sarasota Classic Car Museum is one of the oldest car museums in the country, with a high-powered collection of vintage, exotic and one-of-a-kind classics, concept cars, American muscle cars, European racing cars, motorcycles and more.

is one of the oldest car museums in the country, with a high-powered collection of vintage, exotic and one-of-a-kind classics, concept cars, American muscle cars, European racing cars, motorcycles and more.

My brothers were car-crazy teenagers, and — during the ensuing decades — their love of the automobile matured right along with them. My husband and I recently accompanied one of those brothers to the Sarasota Classic Car Museum, and while they did their thing, I approached the museum in my own way.  Cars as art …

Davira Taragin was the curator of 20th-century decorative arts and design at the Detroit Institute of Arts in the 1980s. She argued that cars are works of sculptural art, and called for “scholarship [that] stressed the purely aesthetic aspects of automotive design as sculpture.” She asserted that, between 1925 and 1950, auto design was part of the larger modernist art movement, adhering to its imperative that form follow function.

The Sarasota Classic Car Museum is one of the oldest continuously-operating car museums in the country, and while the building itself is showing its age, most of the cars and other wheeled vehicles are as bright and shiny as the day they rolled out of the shop.

Tuning out my companions’ talk of transmissions and displacement, I instead focused on the diversity of styles and aesthetic detail. The signage helped contextualize the effects of global events and technological progress on design throughout the course of the 20th century. Shapes and sizes — and of course what was placed under the hood – inevitably reflected advances in engineering. And — in the same way as the history of art traces a timeline of social and political change – developments in automobile design reflect changes through time of cultural needs and aspirations.

Aside from the Flintstones’ stone car out front in the parking lot, a great starting point for a trip through automotive design history was a 1905 Schacht “High Wheeler” which appeared to be modelled out of buggy parts repurposed from the waning carriage industry. This particular vehicle was “half restored” some 50 years ago, meaning one half was restored from front to back, while the other half still shows the derelict condition it had reached after 5-plus decades.

Nearby was a sign referring to “One of the biggest layoffs in history” — which occurred when horses were retired from the transportation industry after WWI – noting, however, that the term “horse power” continues to be a measure of automobiles’ mechanical muscle.

In the early 20th century automobile designs were strictly utilitarian, but from that starting point a rich chronology of design concepts defines moments in time.

Before 1908, cars were a luxury item, with fewer than 200,000 on the road. Then the automobile came into its own when Henry Ford initiated assembly-line production and began building affordable, dependable vehicles. His Model T sold 15 million units by the time it was discontinued 19 years later.

With the 1920s came a period of economic prosperity, and the decade was called “roaring” because of the exuberant, freewheeling popular culture that characterized it. Suddenly Americans wanted more than just a sturdy, affordable car. They wanted style, speed and luxury too.

Tito Anselmi, author of an essay on European auto design, argued that European car designers in those days were heavily influenced by high-art movements like Art Nouveau and Art Deco, in order to appeal to the tastes of the upper-crust buyers who dominated the European market.

In the 1930s the invention of the single-hull chassis made cars easier to produce and lighter weight. This innovation allowed loads to be supported through the vehicle’s external skin — similar to an egg shell — providing greater structural integrity.  New stylistic opportunities arose, too, as previously distinct features like headlights and running-boards could now be integrated into the body. Two-tone exterior color schemes made less sense and fell out of favor.

While engineers have known for a long time roughly what it takes to create aerodynamism, it was some time before those principles were applied to automobile design. Early mass-produced cars didn’t need to incorporate aerodynamics because they weren’t going anywhere fast. Some racing cars of the early 1900s incorporated tapering and aerodynamic features to one degree or another, but in the 1930s aerodynamic principles – made feasible by the single-hull chassis — began to be applied in family-vehicle styling. It was a teardrop-inspired design that would dominate for decades to come.

WWII – riding the coat-tails of the Great Depression — caused a major interruption to commercial car production. Automobiles stopped being made in 1942, and production of cars for civilians didn’t resume until 1946.

But the war also resulted in an important car design innovation. Called Ponton styling — from the French for “pontoon” — it was the culmination of the decade-long trend toward a single uninterrupted form from nose to tail.

The aerodynamic and visually cohesive Ponton styling dominated through the ’40’s and ’50’s and into the 1960’s, with rounded hoods and bulbous headlights creating a flowing, muscular effect that reflected the confident, assertive optimism of the nation. More chrome and bigger fins came to dominate the US auto aesthetic.

Elsewhere in the world, thought, post-war circumstances were very different. European car manufacturers scaled down to more compact and economical forms, as did Japanese auto-makers.

The American trend toward “boats on wheels” eventually imploded, perhaps influenced by European, and particularly Japanese, imports into the United States. These smaller cars — more affordable and easier to park — filled a gap in the US market.

As always, though, there was a significant segment of buyers demanding fast and sporty cars, and the small, less-powerful foreign cars that were flooding the American market just didn’t make the cut for them. Enter the iconic Ford Mustang and Chevy Camaro  — statement styling with extended hoods and low-profile cabins and lots of horsepower.

Foreign imports, the energy crisis in the early-70s, and economic stagnation dealt a devastating decade-long blow to American auto design. A growing environmental consciousness viewed the automobile as particularly destructive and wasteful of the earth’s resources, and America’s big, powerful cars were targeted as being socially-irresponsible.

As consumer demand and government regulation forced automakers to focus on efficiency over aesthetics, auto engineers began to wield more control over design than stylists.

The introduction of unprecedented bright colors of cars in those days was perhaps an attempt to compensate for a subconscious sense of loss.

Trends march on. Concerns for safety, boredom with “boxy” and an economic boom influenced automotive design in the 1980s and again the 2000s, bringing an explosion of different styles in the aughts. Burger King’s 30-year-old “Have it your way” slogan foretold of auto designers generating a diversity of shapes and sizes to appeal to a diversity of car owner interests.

Automotive design is an art form that both leads and follows contemporary public taste and culture. From the early days of the industry cars have been tied to human aspirations as symbols of success or personal statements of one sort or another — shape-shifting with the times.

In the early ’80s I drove a Saab. I loved my Saab. One day I was told that I looked like a Saab owner. I wasn’t sure what that meant, but apparently I was projecting something about myself through the car I chose to buy.

What does the car you drive say about you?

If you were offered one of the following vehicles for a week, which one would you choose?

2 thoughts on “The Art History of Cars”