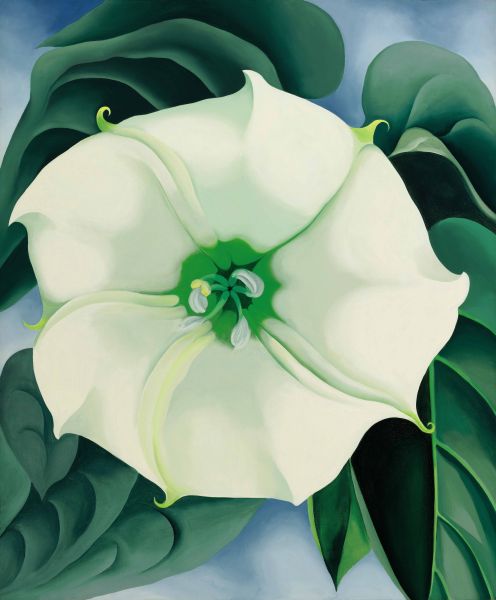 “When Georgia O’Keeffe paints flowers, she does not paint fifty flowers stuffed into a dish. On most of her canvases there appeared one gigantic bloom, its huge feathery petals furled into some astonishing pattern of color and shade and line…” Time, 1928

They’ve been celebrating at the Georgia O’Keefe Museum here in Santa Fe for the past couple of days!

The 17-year-old museum decided to sell three paintings from its collection of 1,149 works by G.O’K. The museum holds half the artist’s lifetime output.  But, because “there are gaps that need to be filled,” in September the decision was made to sell three pieces to benefit the Acquisitions Fund.

One of the three, Jimson Weed/White Flower No. 1, is one of the most well-known examples of O’Keeffe’s celebrated flower paintings, which are among the most recognizable images in art history and popular culture.

Here’s why they’re celebrating: the work was expected to sell for an estimated $10/15MM. In the end, it sold on Thursday for $44.4 million! The buyer’s identity is unknown, but the auction opened with seven bidders vying for the work before settling into a lengthy two-way battle, with the winning bid made on the phone.

Jimson Weed/White Flower No. 1 was owned originally by the artist’s sister, Anita O’Keeffe Young, whose estate was sold at Sotheby’s in 1987. At that time the painting sold for $990,000. In 1994 it was sold again into a private collection for $1MM. It was donated to the Georgia O’Keeffe Museum by The Burnett Foundation in 1996. It spent 6 years on the dining room wall in the Bush White House and has been featured in nearly every major O’Keefe retrospective, including those at MOMA in New York and the Whitney Museum of American Art.

I wonder how long it will be before the buyer’s identity is revealed. (Editor’s Note, 02/26/19: Turns out it was Walmart heiress Alice B. Walton who bought the painting for the collection of the Crystal Bridges Museum of American Art in Bentonville, AR)

“When Georgia O’Keeffe paints flowers, she does not paint fifty flowers stuffed into a dish. On most of her canvases there appeared one gigantic bloom, its huge feathery petals furled into some astonishing pattern of color and shade and line…It is enough to say that Miss O’Keeffe’s paintings are as full of passion as the verses of Solomon’s Song.”   Time, 1928