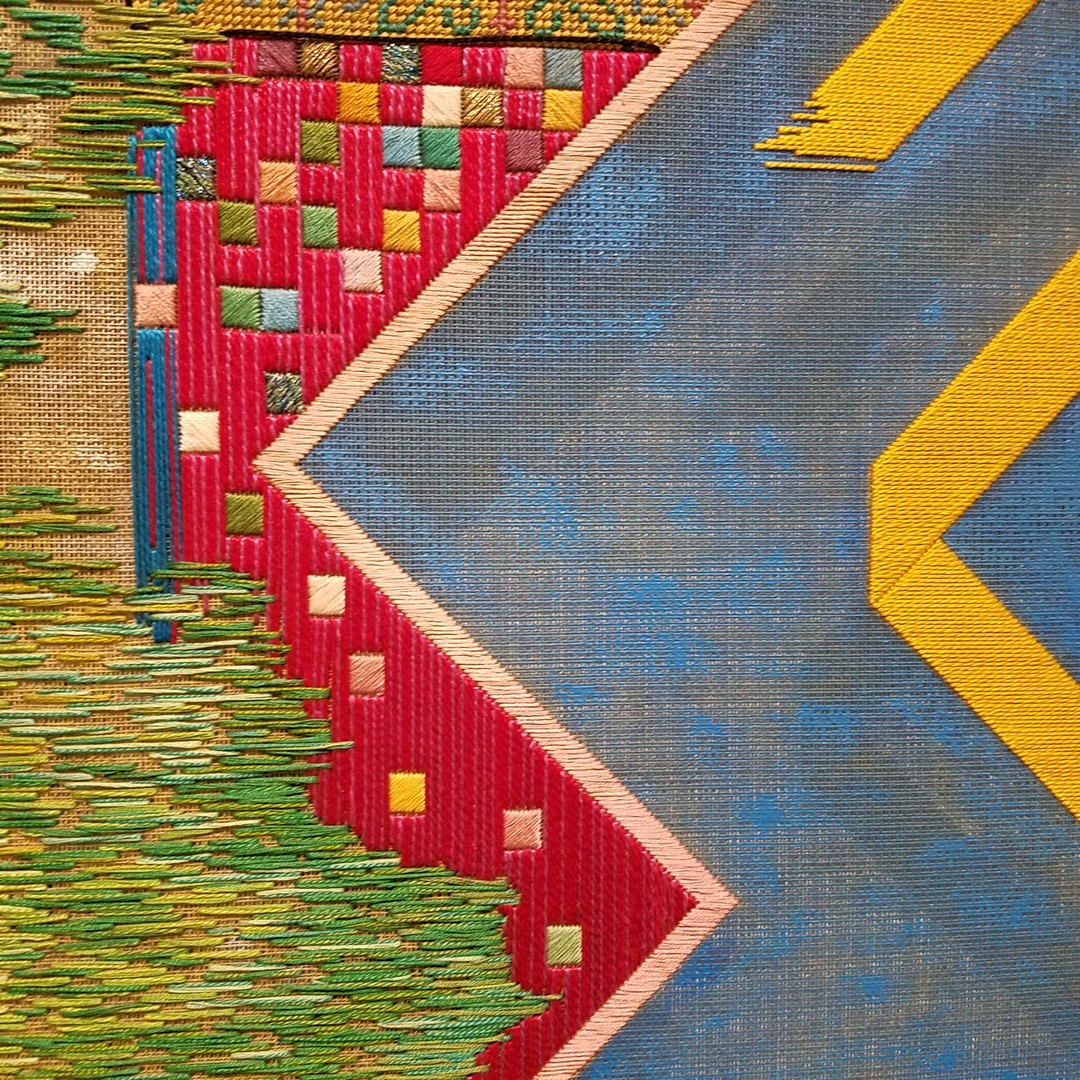 The exhibition, Nicolas Moufarrege: Recognize My Sign (on through Feb 16, 2020 at the Queens Museum, New York City) traces the evolution of this young artist’s work to the end of his all-too-short life. Including nearly 40 tapestries and canvases, as well as drawings, photographs, and primary documents, the exhibition follows the artist’s relocations from Beirut to Paris to New York, and considers the effects these transitions had on the development of his body of work.

Egyptian-born to Lebanese parents, he was raised in Beirut, receiving undergraduate and graduate degrees in chemistry from the American University of Beirut. In 1968 he moved to Cambridge, MA on a Fulbright Grant and a Harvard University assistantship; it was during that time that he decided to pursue a career in the arts. He returned to Beirut where he produced small tapestries, mounting his first exhibition there in 1973.

He called his practice “experimental weaving,” developing his tapestries on a lap-sized loom using various colors of silk, cotton and wool threads to create texture, movement, and imagery. He would begin stitching on needlepoint canvas without preliminary sketches, resulting in improvised figures and scenes that appear to emerge organically.

“This is how traditional craftsmanship becomes a personal art full of promise.”
Lebanese artist Etel Adnan, referring to Moufarrege’s work.

In 1975, the Lebanese Civil War changed everything, destroying the beautiful cosmopolitan city that Beirut had been. Moufarrege fled to Paris, where he began to make larger works and to combine embroidery with areas of paint. The subject matter of these paintings is primarily figurative: male bodies, seen from behind, are found gazing into fantastical landscapes that merge into geometric patterns drawn from Islamic tilework and Japanese textiles.

In 1981, Moufarrege moved to New York City, where he became a central figure in the burgeoning East Village arts scene. He began writing about art and curating exhibitions while continuing to produce his own art. While his earlier pieces referenced Baroque works by the likes of Guido Reni and Peter Paul Rubens, his new approach to imagery and composition juxtaposed appropriated popular images. With a more trenchant and humorous eye he made wry commentary about the process of making art.

In 1983 Moufarrege created a series of horizontal, scroll-like tapestries emulating comic strips, but whose narrative — if indeed narrative actually exists — is open to interpretation. Adjacent wall text tells us that many of the images relate directly to the atist’s life and experiences, and that several passages refer to the trauma of war. Even without in-depth analysis of meaning, though, these scrolls reveal the artist’s intellect, wit and worldliness.

The following year, he made a series of tapestries that established dialogues between Roy Lichtenstein’s graphical comicbook paintings and other famous artworks, set into compositions inspired by Piet Mondrian. One can’t help but think, with Hokusai’s Great Wave about to swamp Lichetnstein’s Drowning Girl, that maybe she should have swallowed her pride and called Brad for help after all!

By avoiding dichotomizing distinctions like East and West or fictional and real, and by creating connections between past and present, Moufarrege produced a new form of visual narrative.

Nicolas Moufarrege’s art drew from a deep well of personal experience—including references to his migrations and his identity as a gay man. To the end — there are numerous works in the show produced during the final year of his life, when he was very aware that his time was limited — his canvases continued to convey wit and imagination, merging his distinct ethnic and cultural roots with a global, historical perspective.

This is the first solo museum exhibition of Moufarrege’s work. Following a three-month stint at the Contemporary Art Museum Houston (November 10, 2018 – February 17, 2019), Nicolas Moufarrege: Recognize My Sign is currently at the Queens Museum, through February 16, 2020.