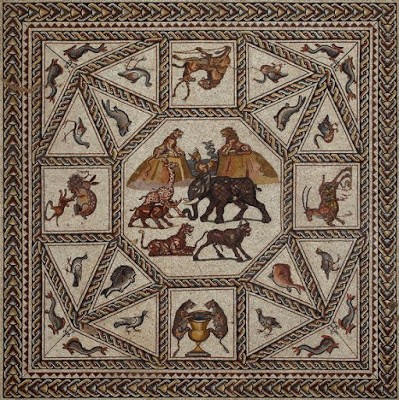 Archaeologists wonder at the absence of deities or people in this 3rd-century Roman floor mosaic, showing only exotic predator and prey animals unto themselves.

At the Frost Art Museum at FIU in Miami, Florida, through May 15, 2016, is an opportunity to see an extraordinarily well-preserved 3rd-century floor mosaic: Predators and Prey: A Roman Mosaic from Lod, Israel. Adding to its interest value is that it holds an unresolved mystery:  Why are there no deities or human beings portrayed, among the menagerie of exotic animals? This is extremely rare for such a large floor mosaic from the time period.

The Lod Mosaic dates to when the town of Lod was a part of the Roman Empire. The amazingly detailed mosaic is thought to have been the floor of a large audience room, in a sumptuous villa owned by a Roman merchant whose trade route crossed between Jerusalem and the Mediterranean. The town of Lod stands on the site of the ancient city of Lydda, which developed in a fertile plain on an important trade route, the Via Maris, from Egypt to Syria and Mesopotamia. As this mosaic attests, it was a center of culture and craft production.

Archaeologists have calculated that more than two million tesserae (mosaic tiles) were used to create the 1,700-year-old masterwork. Three panels from the excavation are included in the exhibition, two rectangular end-panels surrounding a large square central medallion. Featured are indigenous animals coexisting with ferocious wild creatures such as lions and tigers (oh my!), an elephant and a giraffe, and Asian water buffalo, plus marine life, a sea monster and merchant ships.

Learn more about the Lod Mosaic at http://lodmosaic.org/home.html